We try to stretch our budget as much as we can, but some things just have to be experienced (and thus paid for) when touristing in another country. For Japan that would be enjoying a Ryokan, a traditional accomodation with meals and usually hot springs included. 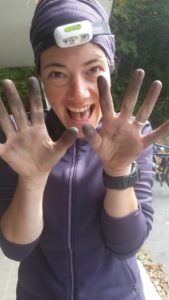 If we’re gonna splurge we want to do it right, so we found one of the most remote ryokan in Japan that we happened to be someehat nearby. To get there we had to cycle to the end of a beautiful mountain road, camp there (in the busstation) and then wait for a minibus from the hotel that would pick us up the next day around noon. We spend the morning lounging around the busstation, brewing coffee and eating all our snacks, and I used a good two hours to fiddle with my gears until they’re mostly working. There’s only one cog that is out of use now, and I can’t for the life of me figure out why, but at least this will get me up the mountains!

The ride to the ryokan is only 30 minutes, but the only alternative is hike for an hour and half because private vehicles are not allowed on the path. We weren’t sure if the ban included bicycles or not, but I’m glad we chose the lazy option because the path is steep as hell and in terrible condition, so we would have to push most of the way anyway.

After check in we got served lunch in our room immediately. The rooms are traditional with tatami mats on the floor, a low table and a heater, kettle, sink and private toilet. After lunch we rushed to the baths, there were so many! It was like a labirynth navigating from one to the other, and Antonio lost each other a few times navigating from sex-segregated to mixed baths. Most of them were outside, our favorite being a stone bath with milky water (mixed gender) with a few over the river, waterfall and autumn leaves. We lounged in there for ages. Finally clean!

Dinner is served for everyone at the same time (6pm) and it’s the same for everyone too. I was worried it would be heavy on the seafood, but since they serve dishes with mostly local ingredients and we’re in the middle of the mountains, most of them were mushroom based. Yum! There was only some freshwater fish that I gladly swapped with Antonio for more vegetable tempura. There is also a small menu in case you want to order even fancier dishes, such as bear sashimi or salamander tempura (!). Antonio ordered bear sashimi. Mixed feelings about that one :/ 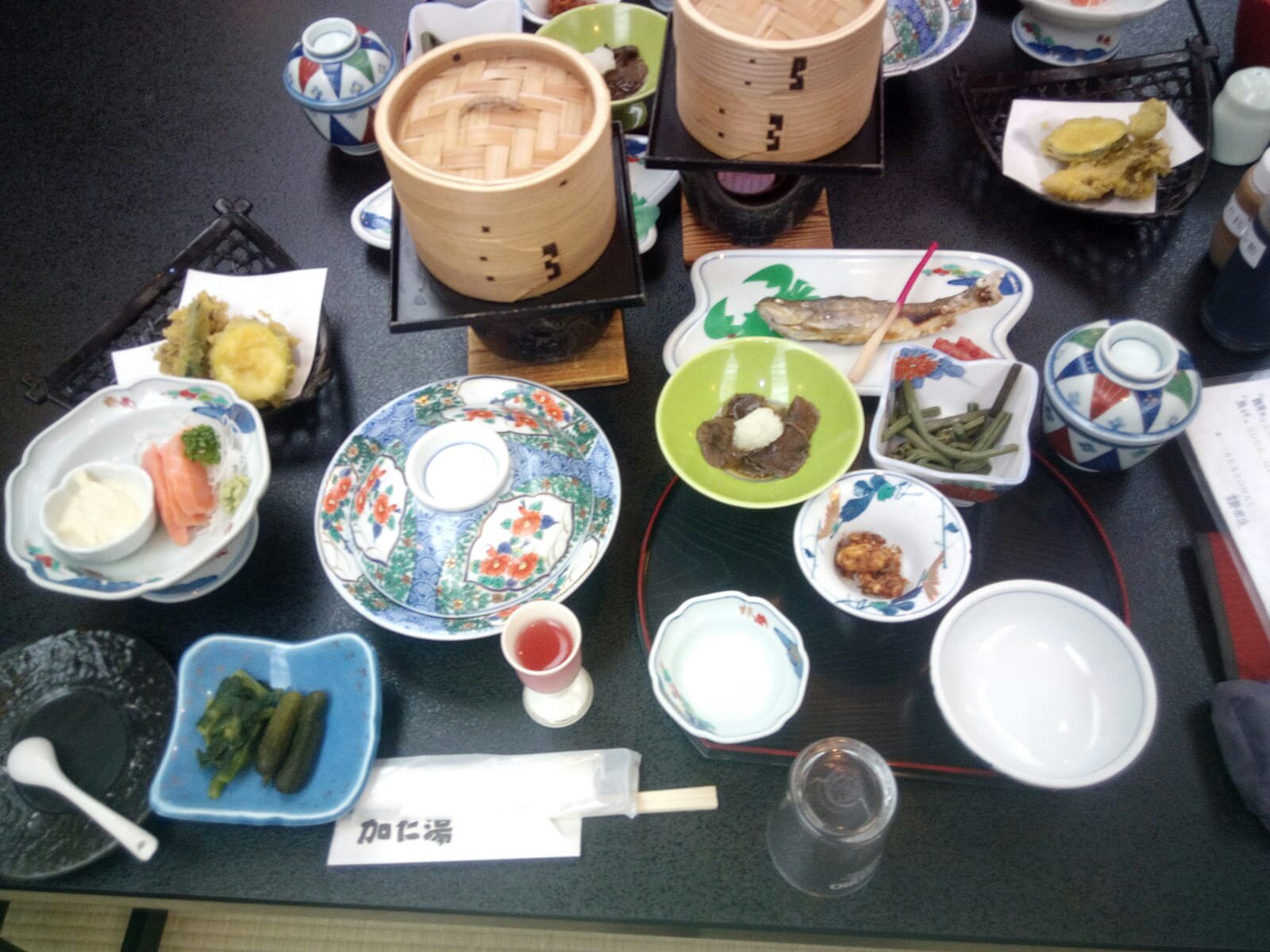 A ryokan is definitely also a place where people come to relax from their busy city life, together with friends and lots of booze, so we ended up making new friends over dinner, getting shots of sake and beer and taking a picture with almost everyone. Very hilarious, also slightly awkward.

After dinner we rented a private bath so we could relax with just the two of us (sorry, new dinner friends) which of course was nice. We slept like roses that night.

Maybe the best thing about this ryokan is that they provide you with yukata, a traditional robe (not to be confused with a kimono, but with the same wide sleeves etc.) which everyone wears all around the hotel. It’s supercomfy and it was nice to get out of our dirty sportsy clothes.

Breakfast was again fantastic, and between check out and the shuttle back there was enough time for another bath, so we went back to our favorite milky water bath, from which we watched a family of wild monkeys on the other side of the river. What a way to start the day!

Once reunited with our bikes we had half a day to get to Nikko, which was an easy but wet ride over a small mountain pass, through the clouds and through the rain. More monkeys! 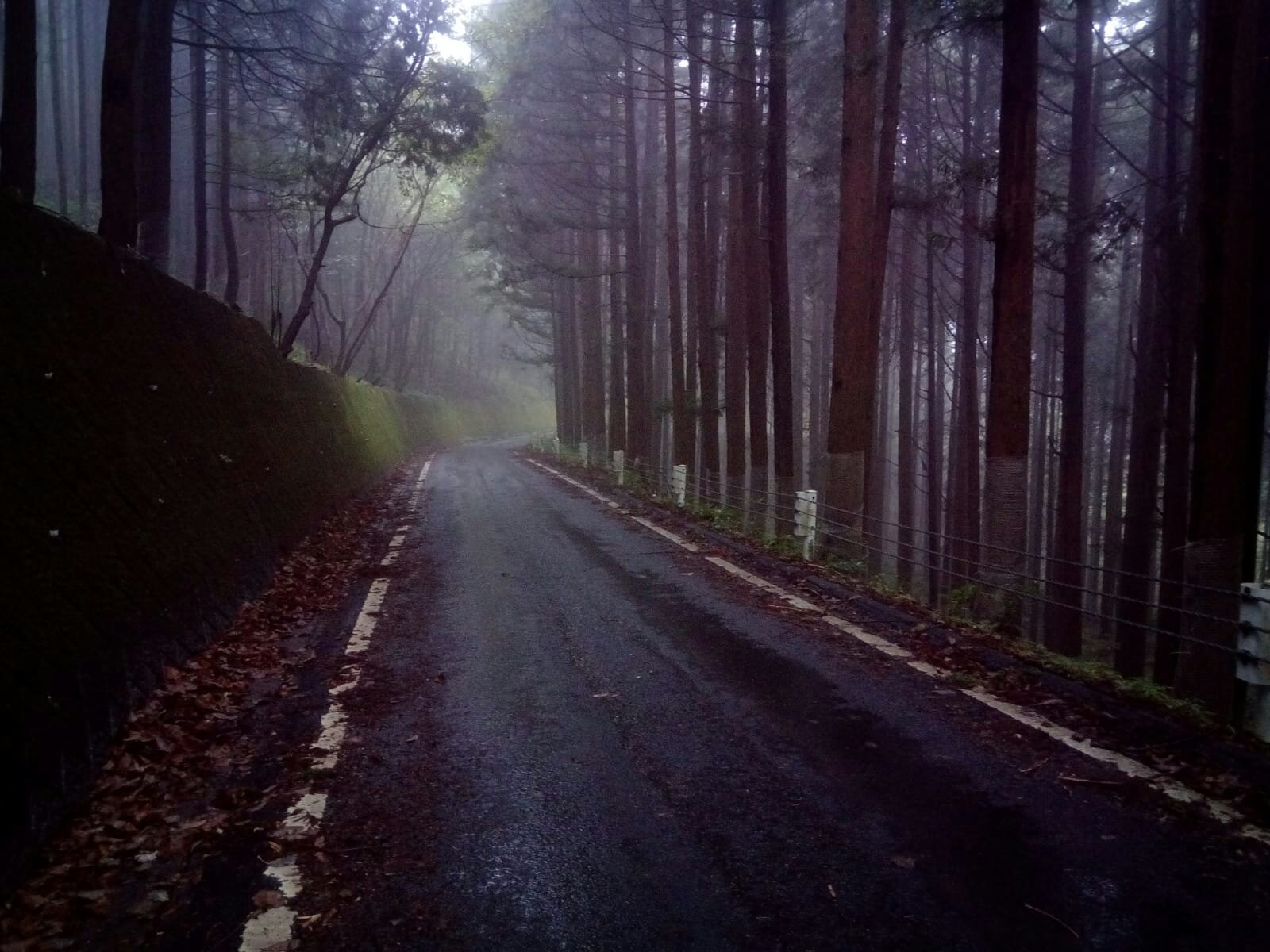 In the last kilometer before our intended campsite there was suddenly a weird noise coming from my rear tire. Before I had time to think “probably something stuck under the fender” it was followed by a loud BANG! and me maybe shouting before coming to a wobbly halt. Oops, that was my rear tire, with both the tire and tube ripped. Oops. An emergency repair in the dark and the rain left me with a new tube (with a broken valve, just our luck) and tire held together with duct tape, but it got us to a sportspark where we camped. At least we were in a town with a bike shop, and at least it didn’t happen on a 50km/hr descent…the rest we will figure out tomorrow.