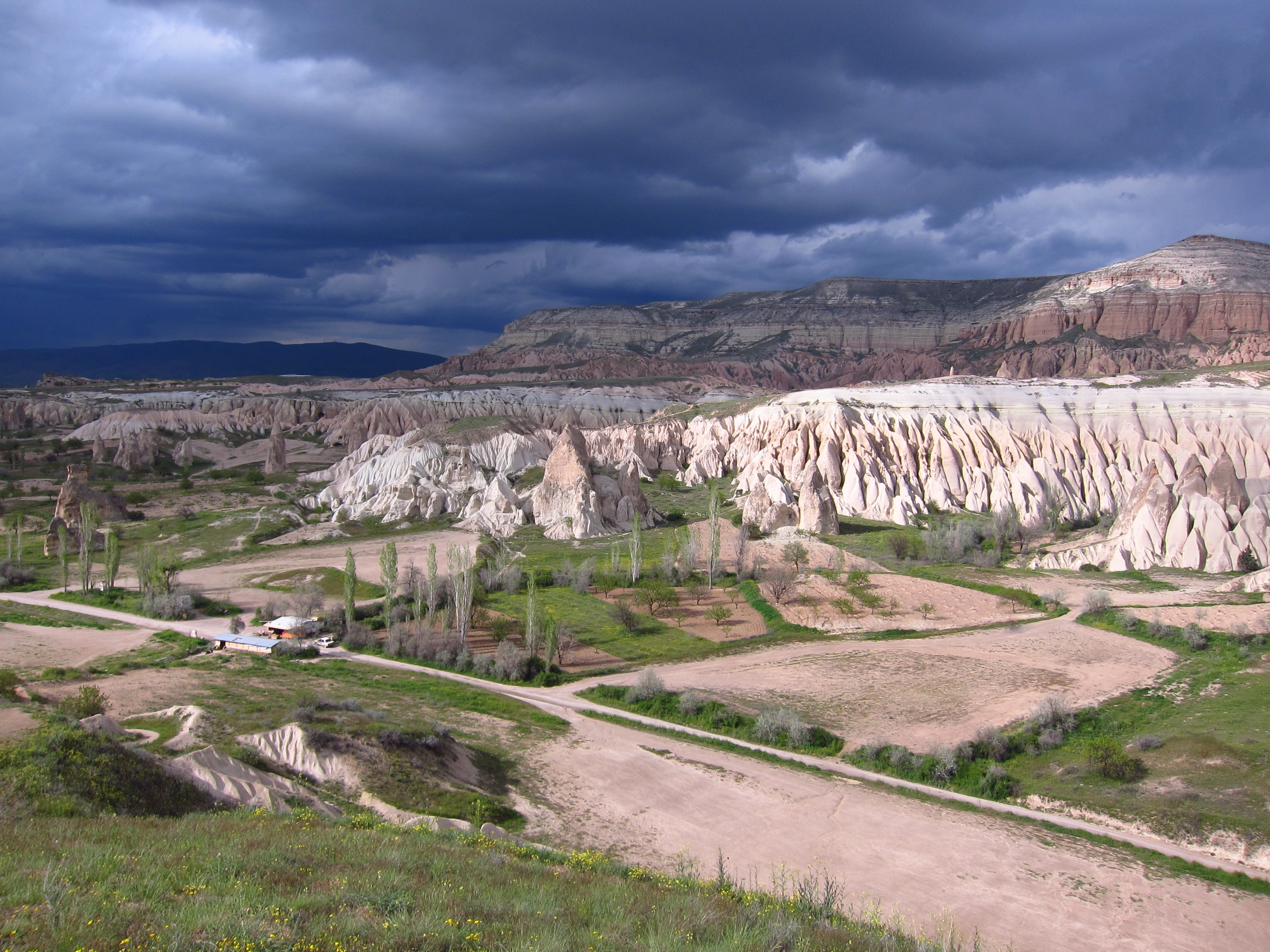 Since we took the train from Tabriz (Iran) to Turkey, we have been here two weeks already. Time for an update!

After arriving in Kayseri in the wee hours of the morning, we decided to head straight for Avanos, one of the main towns in the area of Cappadocia, about 70km away. As we got closer the landscape slowly changed from flat to rolling hills to odder and odder mountain formations, until we could see some traces of the famous fairy chimneys that Cappadocia is famous for. The whole time we had been cycling within sight of the impressive Mount Erciyes.

We arrived in Avanos and checked into our first official (and expensive) campsite of this trip after being greeted by the two resident goats, three resident cats and a bunch of chickens.Naturally, I felt at home immediately and although we planned to stay only two nights, we ended up staying four.

In the following days we would explore the surrounding sights of Cappadocia, which are stretched out over a rather large area. We visited the three underground cities, where early Christian communities lived (including underground stables, wineries and churches) to avoid persecution. A bit claustrophobic, but very impressive as almost all of the underground cities were actually carved out by humans and not just a bunch of caves. It was most enjoyable however to just cycle around the area, wandering off the main roads onto the dirt tracks that are not accessible for vehicles (except the extremely annoying quad bikes that are zooming around everywhere) and strolling around the valleys, admiring the strange rock formations and tiny cave houses that you can find all over the place.

After four nights in Avanos we moved to another campsite a bit nearer to the action, in Göreme, the heart of Cappadocia. Although closer to most of the sights, the town was extremely touristy and not as nice as Avanos. The campsite was also severly lacking in cats…but we did get company of two stray puppies that we had seen the day before with their mother, but that was now nowhere to be found. Poor things.

The most impressive of the attractions was the Zelve Open Air Museum. Zelve is a village where the houses are carved out of the rock walls characteristic of the area. What makes this one so special though, is that it was inhabited up to 1952 and then only evacuated because the continuing erosion that made habitation dangerous. It is basically a huge playground where you can wander in and out of the abandoned houses. Much better than the more famous Goreme Open Air Museum, which is not only more than twice as expensive, packed with people but also a lot less interesting.

After staying in Cappadocia for a week, much longer than we originally planned, we finally managed to leave. While researching routes to get to the Mediterranean coast, Antonio had stumbled upon a random internet comment stating that the route through the town of Saimbeyli was very beautiful. Although slightly out of the way (we would be heading eastwards again) and armed with not much more information than that, we decided that would obviously the sensible route to take, so we set off towards Develi. The weather forecast had predicted rain but for once we were lucky and it was dry, although the clouds looked threathening. We had a long (but pretty!) climb (Mount Erciyes again!) and by lunchtime we rode through a small village looking for a restaurant. There was no restaurant. No problem though, as we were promptly invited to a wedding and provided with soup, bread, bulghur pilav and pickled grapes and given a tour of the local library by the head librarian. The wedding lunch was a bit awkward: judging by the number of people it seemed that the whole village was invited, but where were all the women? I was the only one, surrounded by around 70 men. Big difference this time however, was that they were actually having a conversation with me (in broken English, French and German but mostly a lot of hand waving)! Big difference with Iran, where most of the casual male street encounters had been solely focused on Antonio.

Worried that the promised rain would catch up with us in the evening, we looked for a dry (wild) camping spot. Not so easy, as we were in a rather swampy area on the edge of a national park/bird reserve. In the end we managed to set up camp in an abandoned building, killing not two but three birds with one stone (not the ones from the reserve though, only figurative ones): wild camping is illegal in Turkey, it is definitely not allowed in national parks and we were now trespassing too. Great score!

The next morning it did rain so we set off wrapped up in our waterproofs and plastic bags. Later that day the rain stopped for a while but in the late afternoon came back in full force. It even hailed! Cold, tired and grumpy we rode into a tiny village where a man and a boy beckoned us inside a tiny building. What looked like a shed from the outside turned out to be the village bakery with a blazing wood oven, a pile of freshly baked bread and family of six piled up inside. Perfect! We were immediately told to sit down in front of the oven, given three breads and water. After we finished some of the bread and made a cup of tea the question was raised where we would sleep. We asked if we could pitch our tent somewhere. Of course we couldn’t! It was raining outside! That would be ridiculous! Instead we must come and stay at Mustafa’s farm. No problem!

The next morning, after an extremely warm and comfortable night we set off again, ready for the Big Climb. Several hours later we found ourselves on top of a 1990m pass surrounded by snow. At least it had stopped raining! This wasn’t the highest altitude of the trip so far (we topped the 2000m in Iran already) but our first proper mountain pass. And since ‘what goes up must come down’ still holds true, the climb was rewarded by a thrilling descent along the hairpin curves into a gorgeous valley. At least we didn’t have to camp on top!

If you -reasonably- expect the road from a nearly 2000m summit towards the Mediterranean Coast to be one big downhill, you would be wrong. After descending to 600m we would climb again to 1000+m, then descend, then climb again. Quite demoralizing, if it wasn’t for the beautiful scenery that made it all worth it.

In two days the scenery changed from snow capped mountains to pine forests to river valleys to coastal plains full of orange trees and olive groves. The temperature changed accordingly too. For the past few weeks we have been huddled together in the tent, fighting over whose turn it is to have the hot water bottle, sleeping on top of an emergency blanket (affectionately called ‘The Space Blanket’) in three layers of clothing and sometimes waking up with frost on the tent. Now, suddenly, we sleep with the doors open in as few clothes as possible while sweating our asses off. Nice, for a change!