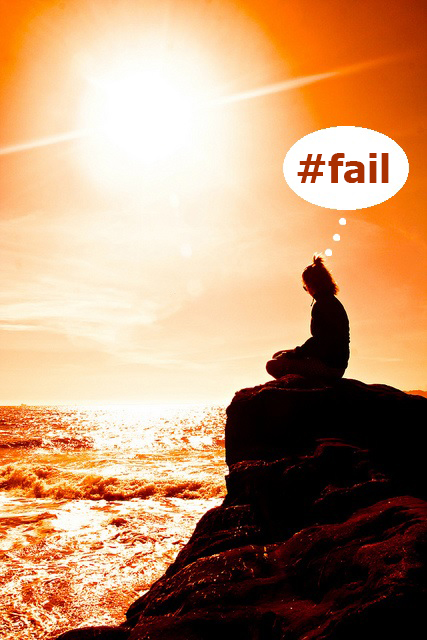 The other day I downloaded one of these guided meditation apps on my phone, desperately in need of some peace and quiet after another night where my brain just wouldn’t shut up about money or the lack thereof, the future, me being a sad sack for living with my boyfriend’s parents, how I should really go for a run tomorrow, etcetera etcetera.

Because we all have those nights, right?

Right, so I downloaded the app. It carefully let me select my mood (worried, anxious and tired – I think there was a maximum of three) so it could better recommend a guided meditation. It recommends one that is calming and grounding. Aren’t all meditations supposed to be calming and grounding? Anyway, it asks me to sit down comfortably and to close my eyes. I do what I’m told. Is my bed a good place to meditate? If I try to wrap my legs into one of these meditation-y positions it hurts and surely meditation isn’t supposed to hurt, right?

I close my eyes again, and feel the surface I’m sitting on, like the app asks me to. My bed is soft and squishy and comfortable. I feel my butt sinking further into the matrass. My knee itches. I scratch before I realize that I’m probably supposed to just let it pass. Like thoughts and clouds or whatever.

The highest mountain in the world.

Now the app asks me to imagine I’m standing on a mountain. “Imagine you’re standing on the highest mountain in the world”, no less. That would be the Everest. But how did I get here? Is this supposed to be relaxing? Don’t these people know that there’s two-thirds less oxygen in the air than at sea level? And the cold?! I shudder.

“Feel the ground under your feet. It is made of earth and rock”. Earth and rock? Snow and ice and possibly dead bodies, you mean!

I decide that the top of the Everest is not a good place to meditate and that the woman’s voice guiding the meditation must have been speaking figuratively when she mentioned the highest mountain in the world. I try to move my thoughts to another mountaintop. To err on the safe side I pick one that’s significantly lower: the Montgó, the mountain that towers over my current place of residence. It takes a while to confirm that the ground is indeed made of earth and rock and now the woman’s voice is suddenly talking about “soothing blue skies” and how beautiful the view is and that you “can see endlessly far away.” When I looked out of the window this morning the mountain was covered in dark clouds. Bitch.

By now I’m so worked up about the inaccuracy of my guided meditation and my inability to not overthink things that rip my earphones out, switch off the app and toss my phone to the other side of the bed. Why is that I have apparently no imagination when it comes to conjuring images of soothing and grounding mountaintops, but my imagination goes into overdrive when thinking about possible disaster scenarios and other things that could go Horribly Wrong? Because I don’t meditate, that’s why.