After our successful summit of Norikura pass (twice!) but our failed attempt at, you know, actually passing it, we were resolved to try again the next morning.

We carefully counted our food options. Our ‘base camp’ was miles away from any supermarket, but with our emergency noodles and curry we would have enough food to see us through another attempt.

The next morning, again, we woke up with frost on the tent and blue skies above. Again we couldn’t think of any reason why the pass wouldn’t be open, but yesterday we learned that our optimism counts for fuck all, so we were a little bit more careful.

In a hopeful mood we set out to the parking lot/bus station where a few cyclists were getting ready, and some people were just hanging around. Hmm. Upon further inspection we discovered a sign at the bus ticket office that said: “No bus today”. Hmm, that wasn’t very promising, because the bus is (together with a bike or a taxi) the only way to get up the pass. But maybe it was because it was Monday? Much more quiet than on the weekend. That must be it. Right?

Again we stationed ourselves in front of the tourist information office waiting for it to open at 09:00. This time the lady already knew what we wanted and she shook her head the moment we stepped inside. Closed.

Defeated we retreated back to our bench and considered our options. There was no way we could visit Takayama now, unless we would backtrack all the way down to the busy main road that we suffered for a while two days ago, full of trucks and tunnels and shitty pavement. Not an option. We would have to get to Kyoto from a more Southeastern angle, which wouldn’t be bad, just plan B. It would still involve quite a lot of backtracking though, which would have made these two days of cycling really beautiful but completely pointless in terms of getting anywhere.

We stared at our maps again. Actually there was a tiny road just in front of our bench with cars occasionally turning into that direction. We followed it down the map and indeed: it did go somewhere! It would take us in the right direction, but over another (much smaller) mountain pass. A bit further down the route we could follow a tiny road over another pass, and then we would be back on track for our plan B route. That sounded like a reasonable alternative for Norikura! Our disappointment turned into excitement. Let’s do this!

Just as we were getting ready a friendly motorcyclist that we had been chattig to earlier that morning walked over to us. “Bus OK! Bicycle OK!”, he said enthusiastically while pointing at the mountain. And indeed, suddenly the parking lot had turned into a flurry of activity with people lining up for the bus that looked like it was about to depart. The pass was open! “Let’s do this!” we shouted while high-fiving each other.

While getting ready we looked at each other. For some reason we were still faffing around. I sighed.

“What should we do?”, Antonio asked.

“I feel like we should go”, I answered, emphasising the ‘should’. “But we have done it already, and I got pretty excited about our plan C,” I elaborated.

“We’ve also seen half of the descent on the other side already,” added Antonio.

“But this is what we came for!” I proclaimed.

“What a rollercoaster of emotions!” Antonio sighed. 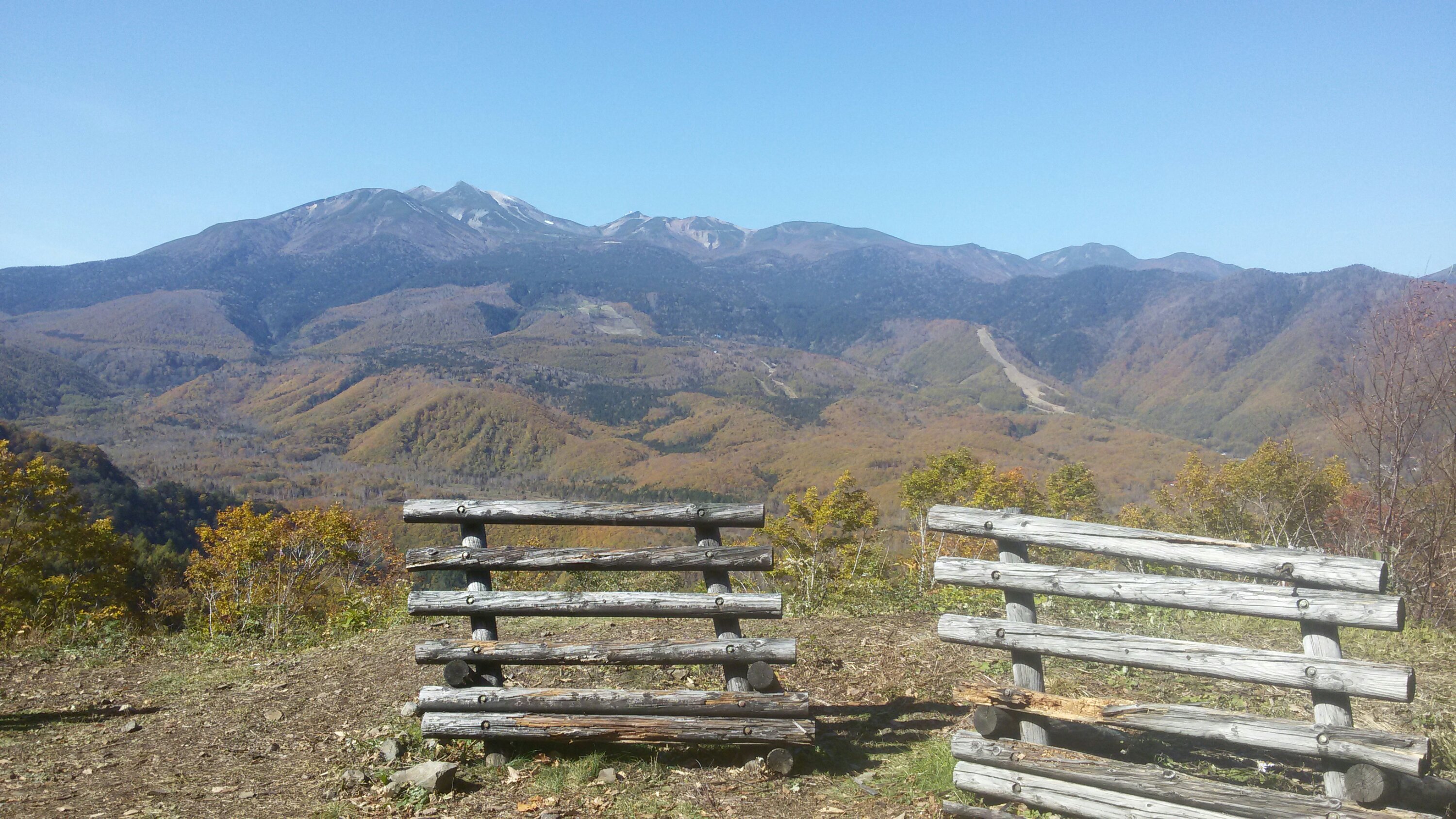 And so south we went, over another, smaller mountainpass, riding through a golden forest of autumn leaves. After a while we joined the main road, ate a bowl of noodles, then left the main road again to cycle through a valley, slowly uphill, looking for this tiny mountain road. After 15-ish km in the valley we found it. It was tiny indeed, and very steep. Up we went. Until, after a few km, a truck passed us, stopped, and the driver informed us that the road ahead was closed.

Not that closed roads really stopped us before, so we asked him if it was okay by bicycle. He just laughed and shook his head. “No”, and tried to explain that something had collapsed. A bridge maybe? He sounded very definitive, so we weren’t even going to try.

The only way to get out of there was to backtrack through the valley, back to the main road, and follow that over another mountain. The long way around. The more boring way around, but at least we eventually made it.

Here’s the profile and a visualization of the route.