Planning a cycling trip is hard: you already know that almost nothing will go according to plan, and there are many uncertainties (earthquakes, typhoons, closed roads, technical failure…we’ve had all of it). But already before we started there was one big fat question mark hanging over the trip: will we be able to cycle Norikura Pass?

Norikura Pass is Japan’s highest (paved) road with the saddle at 2716m, much higher than either of us have cycled before. (The previous record stands at 2188m on the Little St. Bernard Pass on the French/Italian border). It is closed for private vehicles except bicycles and has smooth pavement all the way to the top, making it a bit of a bucketlist item for many Japanese cyclists. Despite the obvious challenge of a long ascent it wasn’t so much a question of whether we would be physically able to do it, but whether we would be allowed to.

Norikura Pass, or Norikura Skyline as the road is officially called, is open for less than half of the year because of the snow, and closes for the winter season on October 31st. However, it might be closed at any time because of weather/snow conditions, so access is never guaranteed.

We approached Mount Norikura from Matsumoto, which we visited the day before to do some sightseeing in a really cool castle. 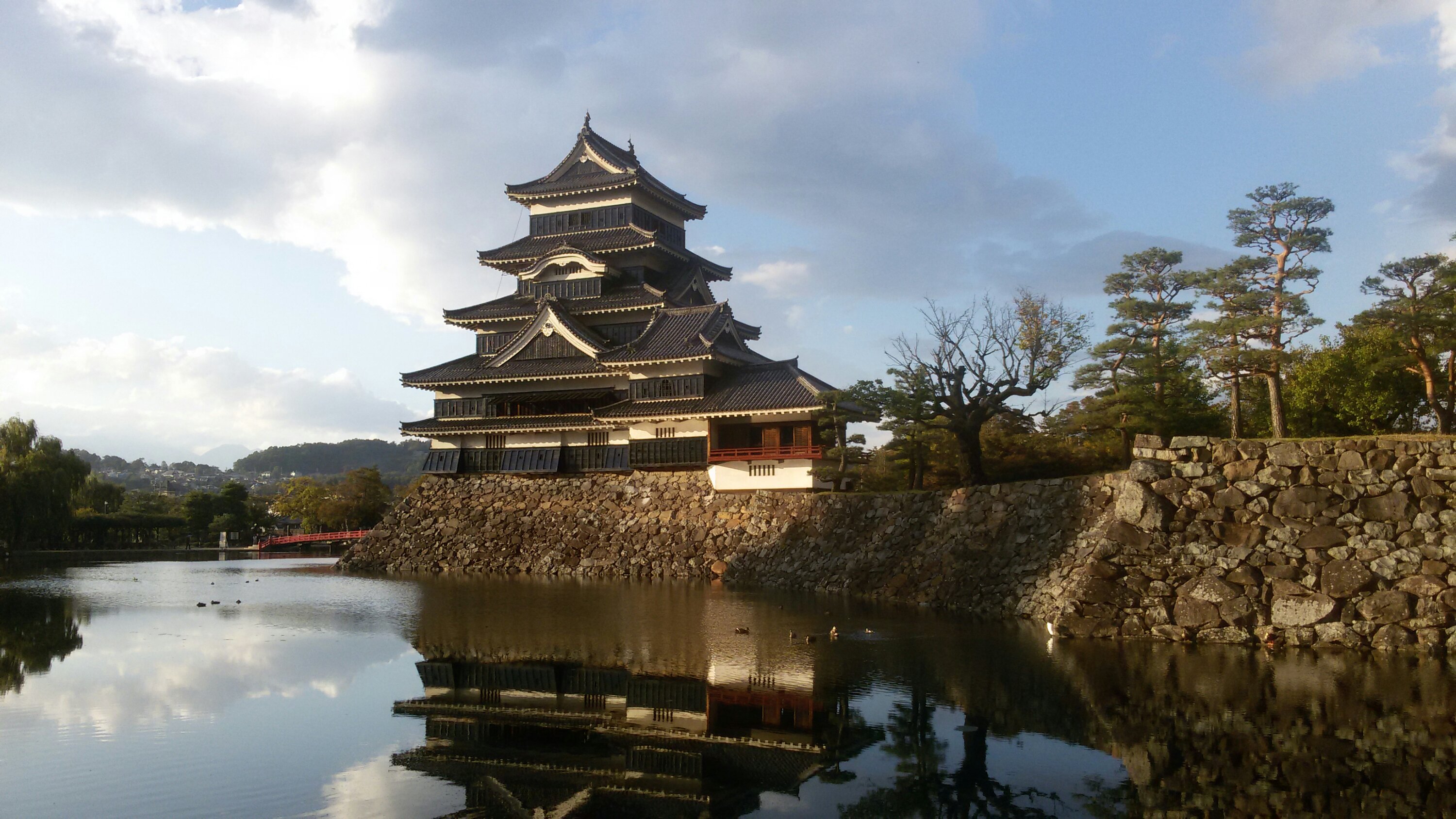 We chose Norikura Kogen as our ‘base camp’ at 1500m altitude. It is a ski resort in winter and hiker’s hangout in summer, with a visitor center, onsen and many hotels, and serves as the gateway to Mount Norikura. Surely someone there would be able to inform us about the road conditions, and we would probably also be able to find a place to camp.

The way up there was lined with tunnels and it rained almost the whole day, temperatures quickly dropping as we ascended higher. We knew that this rain definitely meant snow at higher altitudes but we were on our way now, determined to not turn around just yet. Just hoping that our ‘base camp’ wouldn’t be covered in snow already.

Despite the tunnels and the rain the ride up was beautiful, passing valleys and lakes during peak momiji (fall foliage) season turned the mountain sides into a wall of autumn colors: red, yellow, green, orange…even muted by the rain it was still very impressive.

We arrived late afternoon to the area, just in time to find out from the visitor center that the road was closed today (no surprise, given the conditions), but for tomorrow no one seemed to know anything.

Cold to the bone we set up camp in a litttle grassy area between two parking lots. It had stopped raining at least, but mostly because we had just ascended into the clouds, now surrounded by a thick fog instead. The night sky is supposed to be very impressive here due to the lack of light pollution, but now we couldn’t see more than 50m in front of us. Besides, we had other priorities: getting warm. Luckily there was an onsen to help with that, where they also served pretty good pizza. Score!

In the morning we woke up with frost on the tent but also incredibly clear skies around us. Sun out, crisp autumn air and Mount Norikura towering in the near distance, with a fresh dusting of snow. Perfect conditions, right?!

We waited patiently for the visitor center to open at 09:00 to inform us of the opening of the road. Lots of road cyclists were getting ready in the parking lot, so that was a good sign at least. However, we were still 6km away from the checkpoint that closes the road to private vehicles, and didn’t want to do those 6km of climb for nothing. Better get the definitive yay or nay before that.

Getting a clear answer was not so easy though, not helped by the fact that the friendly lady at the information desk didn’t speak any English. The best we got was that one gate was open but one was not? Not sure what that meant, but we decided to go up and find out.

Giddy with excitement we went up. Climbing up Norikura is not hard, with an average grade of 5-point-something degrees, it is just very long. But long we can do!

At the checkpoint we were informed that we could continue up (yay!) but only on this side of the mountain. We would have to come back down this same side again today. Noooooo!

I get the appeal of a good mountain climb, and this explained the small groups of cyclists passing us on the way to the top. It’s nice to check off the pass from your bucket list, even if you only do one side of it, but the point of cycle touring is that you get from somewhere to somewhere else using your bicycle, so going up a mountain just because and then having to backtrack feels a bit…meh? But since we were here now, might as well! Besides, we were told there was a small chance the top would open up later in the day, if the sun would get the chance to melt the snow on the other side of the mountain. We (mountain n00bs) couldn’t think of a reason why it wouldn’t, the weather was so perfect. Onwards we went!

The climb up is really, really beautiful. The feeling of ‘meh’ got quickly replaced by amazement. Switchback after switchback through the autumn colors. A fresh sprinkling of snow in the background. Thumbs up from other cyclists. Trees turning into bushes turning into shrub. Burning legs and burning lungs. Eating candybars on the side of the road. Peeing down the side of the mountain (cycle touring glamour right there).

Phone camera doesn’t quite do it justice. 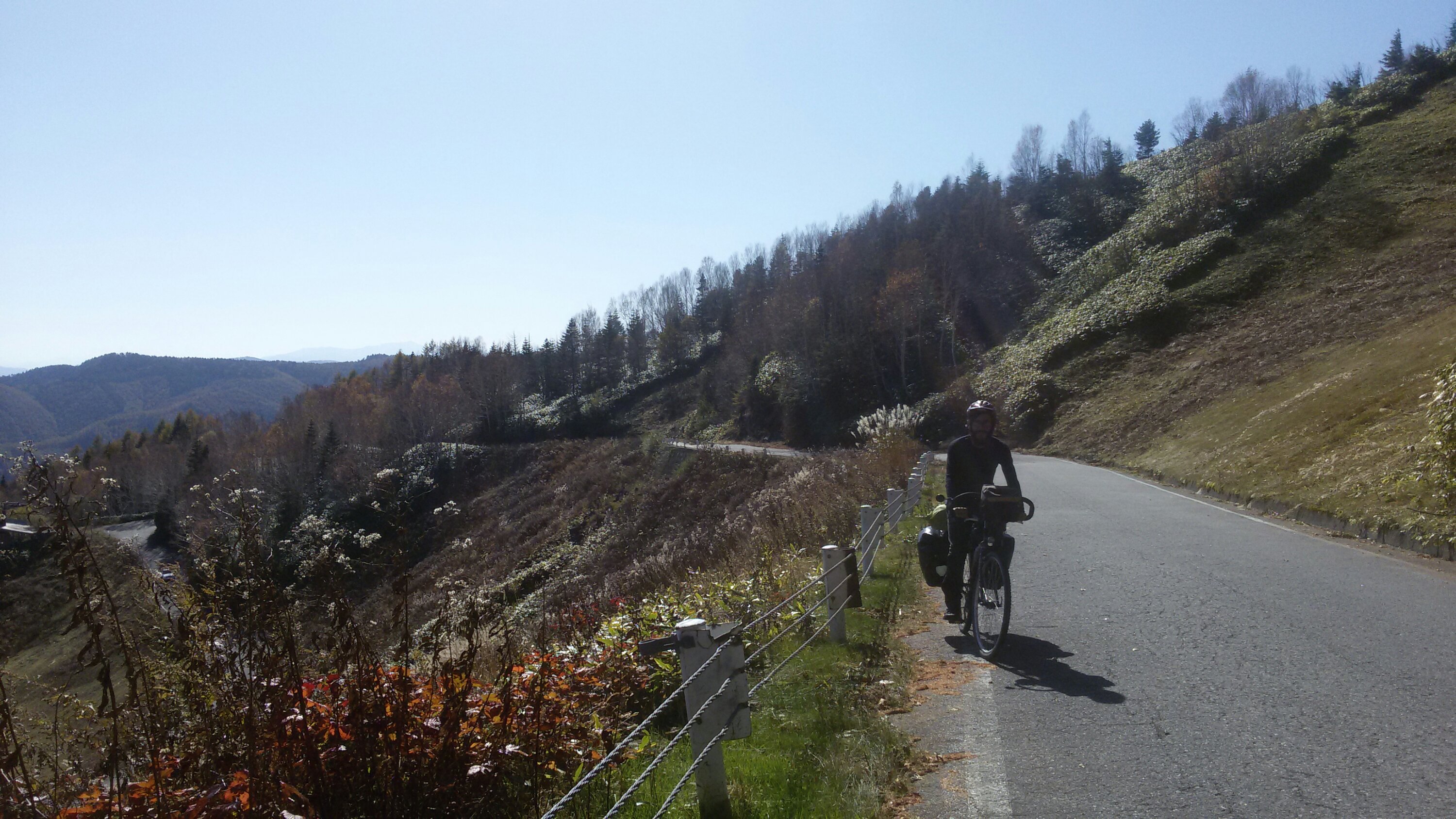 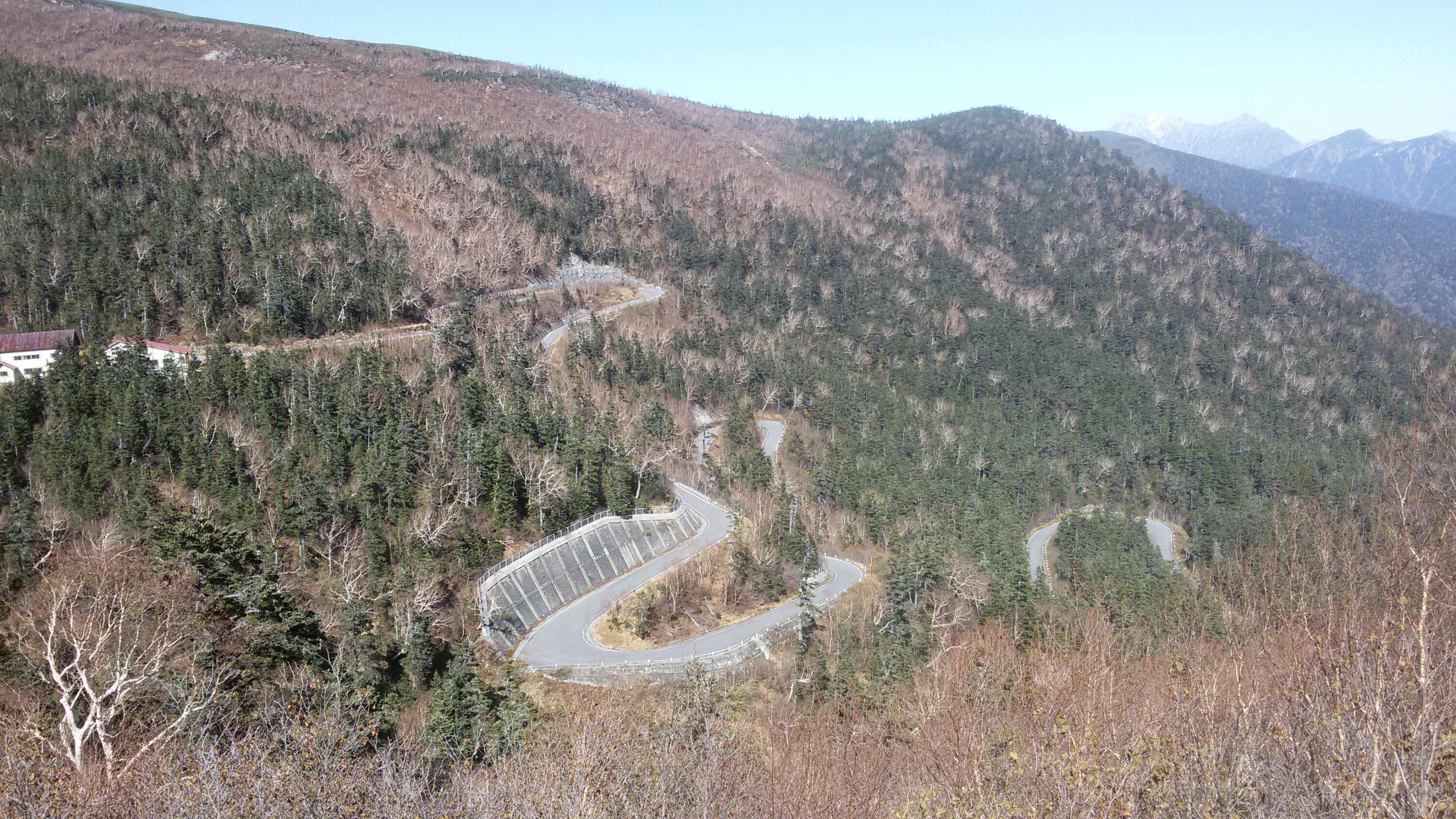 At the top there was a small lake, a bunch of cyclists catching their breath, and a closed gate. Shit! Not entirely surprising of course, but we had been so optimistic that it was still disappointing. 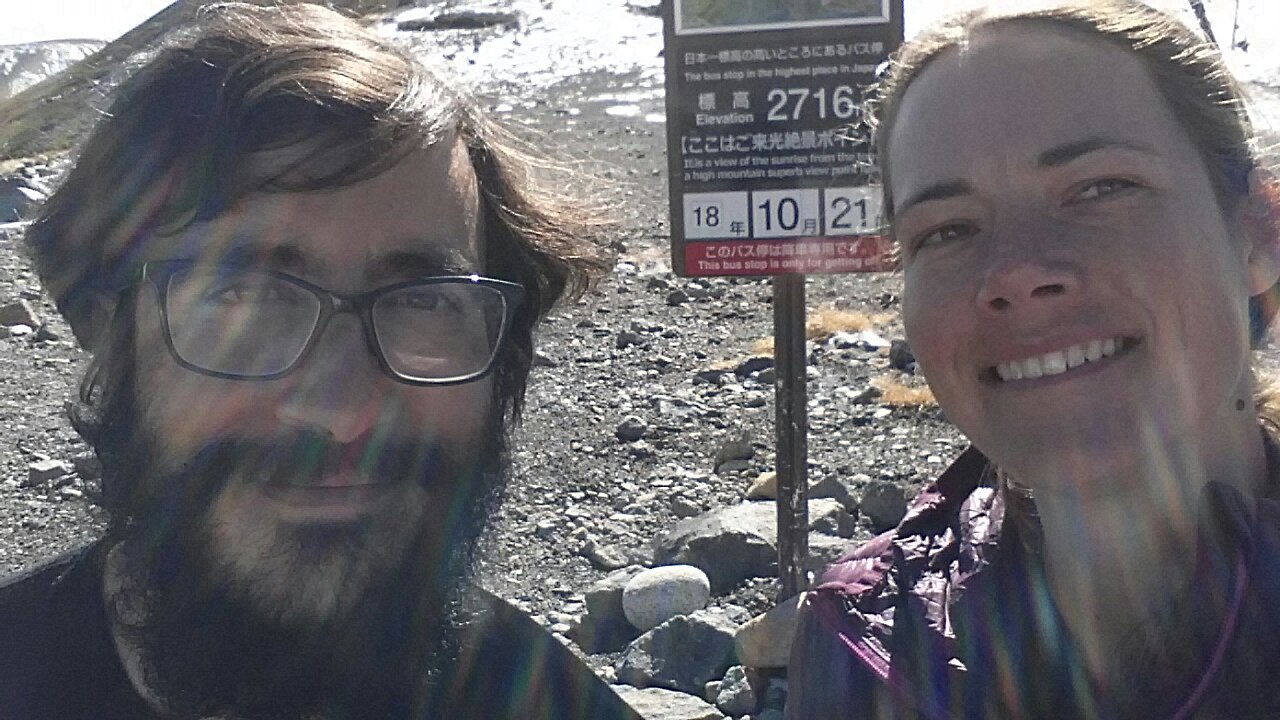 A closed road never stopped us before, and besides, there was not a trace of snow on the road and it looked perfectly rideable. How bad could it be further down? Slowly the plan hatched to go down the other side anyway. The worst that could happen was that we would have to push our bike through some snowy patches, we figured.

Down the other side we went. And it was GLORIOUS. We had the road to ourselves, there was only a little bit of ice in some corners, and we raced down the switchbacks shouting “This is amaaaaaaaaazing!” Then we rounded a corner and had to abruptly brake for three trucks that were parked on the side of the road, and about five people scraping away the last patches of snow with shovels.

We dismounted, put on our friendliest smiles and friendliest “Konnichiwa!” while pretending to be totally unaware of the fact that we shouldn’t have been there at all.

“Jitensha!”, shouted one worker to an older man with a different uniform. Bicycle! He walked over to us and did NOT looked amused.

“Konnichi-“, we cheerfully said together, but before we could even finish our greeting the man shouted “Road closed. No! UP!” while furiously pointing to where we came from.

I have never seen a Japanese person so angry. Oops.

It was very clear that there would be no reasoning with this person. Not that he would have to, of course, because we indeed should not have been there at all, but maybe with a less angry person we could have argued that the road was perfectly rideable (thanks, of course, to their effort to clear it up).

Alas, back up we went, suddenly with very heavy legs. An extra 6km of climbing. At least an hour. It was 15:00, meaning we would at least make it back to ‘base camp’ before dark.

The second time at the top was much less exciting (but still beautiful), just a quick stop to put on all of our layers for a freezing descent. ‘Our’ side of the mountain was now in the shade, and temperatures were dropping fast. On the way down, little pools of meltwater had frozen over again. We arrived at the checkpoint with numb hands and toes, quickly contemplated camping there to be closer to the gate the next morning, but the appeal of the hot onsen won so back down to base camp we went. More instant noodles. More onsen. More frozen nights, although now with a clear starry sky above.

Tomorrow we will try again.