We’re already more than two weeks in Japan (where does the time go?!) and I am barely getting used to these creepy heated toilet seats.

The toilet situation in Japan is all over the place. Literally, because there are public restrooms everywhere, which means that we haven’t camped a single night without a toilet. Quite the luxury, considering that we spend most of our nights outside official campgrounds. Rumour has it that other cyclists have sucessfully slept inside public restrooms but we have yet to try that. Do we have to, though? I think cooking in one during a storm was already way outside my comfort zone regarding toilets.

Camping in Japan, or Hokkaido at least, is so easy! There are quite a few free campsites, which are the best invention ever, but aside from those it is totally OK to pitch your tent at a roadside rest stop, parking lot, tucked away corner of a playground or, as we tried two nights ago, next to the entrance of a baseball field where all the kids were getting ready for their Sunday morning game and just kind of ignored us. We camped a few nights in random parking lots (with restrooms, of course) and you will see a lot of people camping in their car/minivan/campervan so the leap from there to a tent is not that big. And we are of course taking advantage a bit of the general non-confrontationalness of Japanese people, because even if it is not OK, they probably won’t say anything.

We hiked up an active volcano! I am not much of an hiker. Uphills are OK and sort of fun, clambering over tree roots and slippery rocks and loose gravel, but the same route down was an absolute nightmare. Supposedly people hike faster downhill, but not me. I am sooooo scared that I will fall, so use my hands a lot, and there might even have been some butt-on-the-ground sliding been involved. But hey, we did it! The view at the top was of course totally worth it. This photo is of the lower crater, as I didn’t dare to come close enough to the rim to take a proper picture of the summit…yeah, not a brave hiker either. 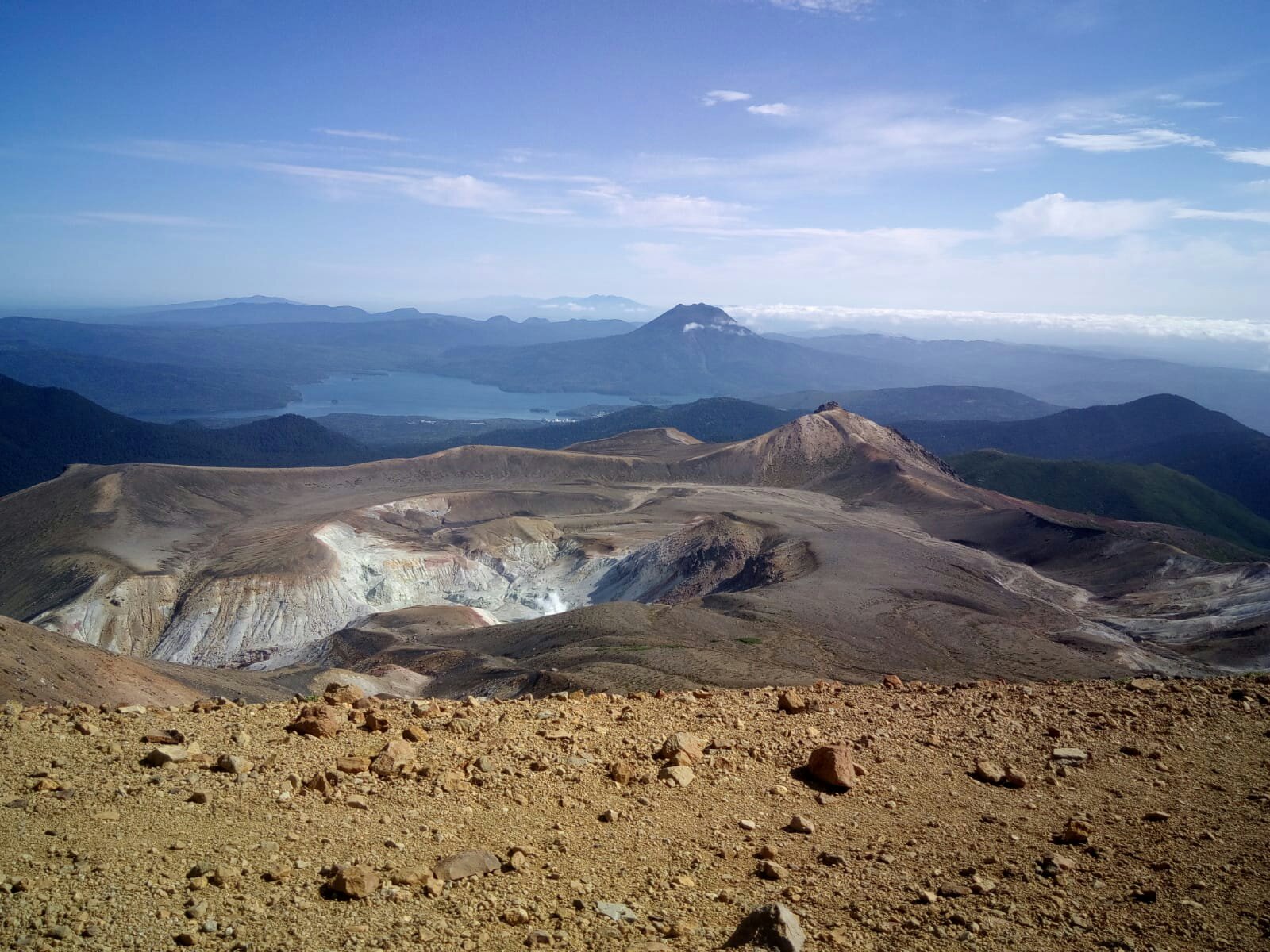 The ride to the volcano was already quite the climb (with a nice visualization here if you’re into that sort of thing), the next morning we hiked five hours up and down this damn thing, and cycled 50km afterwards, and then we were done. Like, could barely move anymore kind of done.

Now we are in West-Hokkaido again we are crossing at least two towns a day, and the konbinis are almost totally restocked after everyone plundered them after the earthquake, which means that we don’t have to carry three days worth of instant noodles around anymore and can eat real food! Yay! Except today, when we crossed the sad resort town of Tomamu and expected to find a restaurant/konbini but found only fancy ski resorts instead, mostly closed for the summer. So we ate our sad noodles on the sad parking lot of the sad trainstation. Sadness all around, but at least the sun was out, we have clean clothes and the road was quiet and downhill and what more do you need, right?